Month four…already??!!!  Nooooo!  And, according to the calendar, its April.  I should have had this post in March.  The devil is in the details….who cares right?  Let’s talk beer!

Summit Maibock!  I’ve heard, from quite many people, that this is THE beer.  According to Summit’s website, “this traditional German style beer earned the nickname “liquid bread” because it was brewed by monks to help them get through Lenten fasting. Moravian 37 malts and Czech Saaz hops give it a toasted sweetness with a little spice in the finish.”  They also say this is the “official beer for May Day celebrations”  however, according to the sweet older gentleman who helps me with my beer pick-up every month, “get it before then, as it will be long gone before May!”

So, what to make this month….looking at the info on the Summit website about Summit Maibock, (read more here) they say to pair this beer with “Pretzels, white cheddar, sausage, ribs, pork and smoked meat…” how about Onion Rings?  Okay, yes!!

There’s a few things you need to know about before I can tell you about the Onion Rings.  The first being that I am a little Irish.  The other is that I love Ruebens.  LOVE them.  What do either of these have to do with Onion Rings?  Well, I decided that what would be the perfect side to Ruebens on St. Patiricks Day?  Onion Rings of course!  (yes honey, I know, Rueben’s aren’t Irish….sigh.)

So, I got everything ready (cut, soaked the onions-measured and mixed the coatings)  to take to our friends for a St. Patrick’s Day celebration.  The husband loaded the car, so I assumed that he got everything…you know what they say about assuming right?  Yeah, so I should have double-checked he had everything.  How was he to know that I had the onions soaking in buttermilk, in a container at the back of our ridiculously small refrigerator.  How was he to remember that I was supposed to be bringing the Maibock with, because I was blogging about these incredible Onion Rings?  He grabbed all the other beer (it was St. Patty’s day and we were going to have Black & Tan’s!), the two Corned Beef Briskets we made the day before, just for Ruebens, the cheese, the sauerkraut, the special 1000 Island Dressing, the loaf of Rye bread and the loaf of Pumpernickel I bought for the sandwiches.  Oh and the Irish Cheddar Cheese plate with toasted Irish Soda Bread I had painstakingly cut for the appetizer plate.  You get the picture.  So, thankfully I had already drank a bottle of beer before we noticed the missing items (so I couldn’t drive back home) and thankfully my friends grew up around River Falls Wisconsin and always have Ellsworth Creamery Cheese Curds on hand (which we usually eat raw…but this time fried).  All was good.  But, in the back of my mind, I kept thinking of those sweet Vidalia rings, soaking in their buttermilk bath, at home.  Were we really going to have to make & eat all those Onion Rings on our own?  Gosh no, we have neighbors!  So, let’s start!

Recipe adapted from Guy Fieri’s version you can find here.

One bottle of Summit Maibock (and more drinking with the rings!)

This recipe makes ALOT of onion rings…so you may want to cut back on the amount of onion you are using if they are large Vidalia’s like mine were.  Or just plan to share them and you’ll be good!

Using a bowl large enough to hold the buttermilk and onions, separating the rings and soak them for at least an hour.  (In my case, they were soaking for over a day…and were just fine!)  If you have a fryer, preheat and get ready as usual.  I used my Dutch Oven and added enough oil that the rings would be able to submerge.  (the recipe calls for 4 cups of oil….which just grosses me out, but I guess you might need that much)  I don’t even want to think of the calories in these beauties…they are worth it! 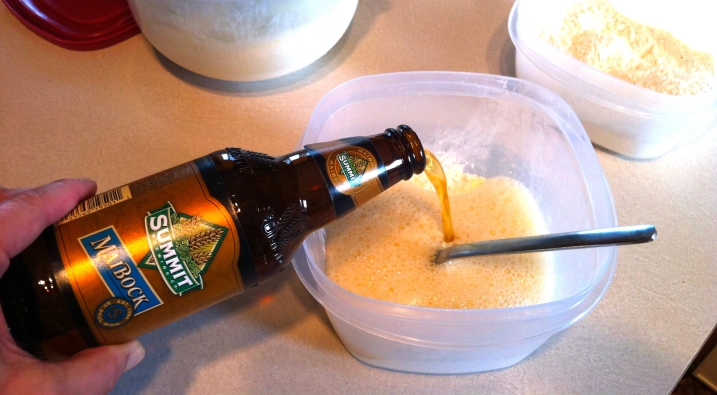 Using two separate mixing bowls, place a cup of the flour in each.  In one of those bowls, add the bottle of beer.  In the other bowl, add the salt, pepper, garlic and any other seasonings you’d like to the flour mixture. (note the plastic containers…I thought I was going mobile with these…)

Once the onions have soaked in the buttermilk, remove them, shaking off the excess and dredge in the seasoned flour mixture and then into the beer batter.  Carefully drop a few into the oil and fry until golden brown.  Be sure to leave enough space around each one as it fries, or they will stick together.  Once done, remove to a paper towel lined plate and let cool slightly before grating Parmesan cheese over them.  And of course, serve & enjoy them with a frosty cold Summit Maibock! 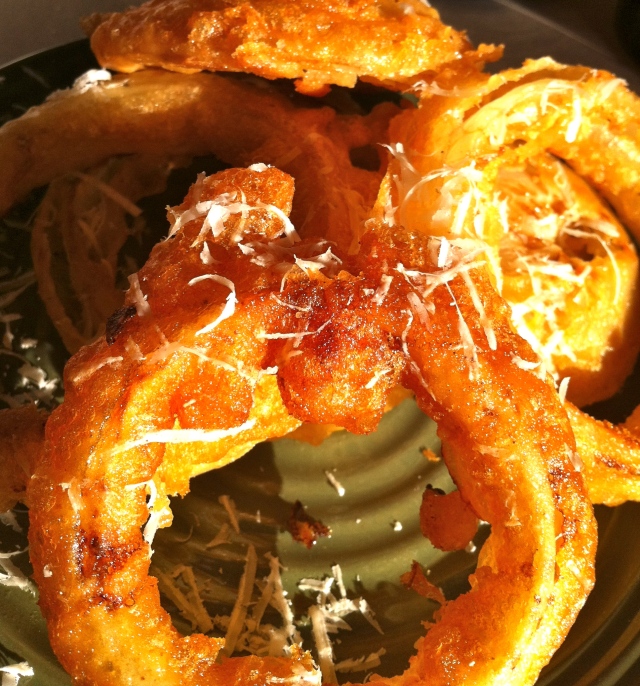 Until next month…(oops, later this month I mean…)

This site uses Akismet to reduce spam. Learn how your comment data is processed.